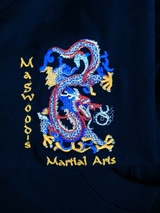 As a child Greg Magwood almost got his yellow belt twice. Eventually in his teens he started martial arts again. In 1988 he started studying Chito Ryu Karate and Canadian Jiu Jitsu with Sensei/Sifu Robert Walther  of The Snow Tigers Martial Arts Association. In 1989 Mr. Walter introduced him to the Martial Art of Tai Chi and the health practice of Chi Kung. Greg was instantly intrigued and became the only teenager in the classes. Later Greg discovered that Sifu Walther knew something called Kung Fu. In those days Kung Fu lessons were closed door invitation only it took close to a year of fairly persistent pestering before the doors opened and My Jhong Law Horn Pai, Hsing Yi Chuan and much more were available to study. From 1991 to 1995 Greg completed a 4 year apprenticeship as Sensei Walther's full time teaching assistant. Pursuing a life long dream Sensei/Sifu Magwood opened his first club in 1994.
In order to cross train and gain more experience Greg participates in countless workshops and classes with teachers of many styles of martial arts always interested in the similarities that define a good fighter. Greg has traveled to Thailand to live and study meditation at Wat Nanachat Forest Monastery in Bung Wai village and to Trivandrum in Kerala South India where he studied Kalarippayattu under C. V. Govindankutty Nair Gurukkal at the C.V.N. Kalari.
At present Greg holds a 6th Dan black belt in Canadian Jiu Jistu and a 2nd Dan black belt in Chito Ryu Karate and is a respected teacher (Sifu) of Tai Chi and Kung Fu. He is a stickler for basics.